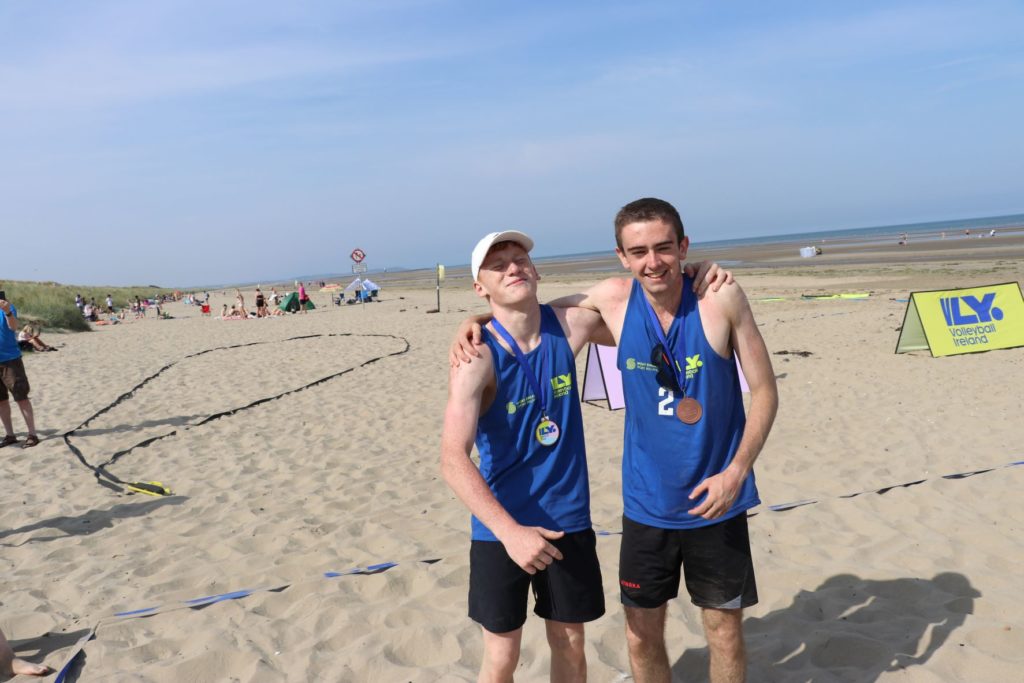 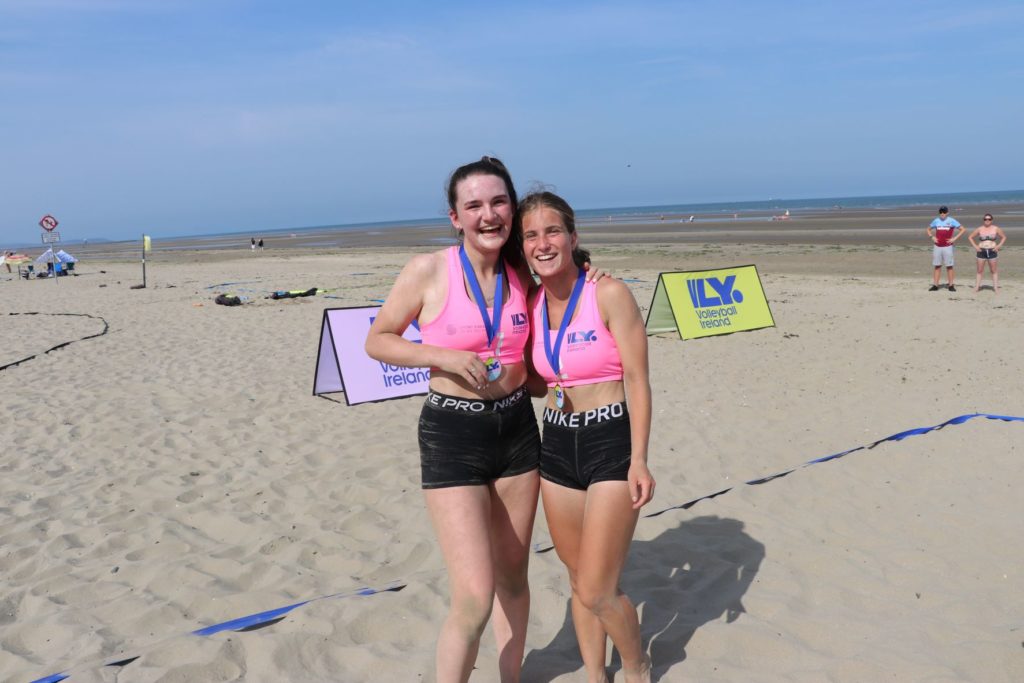 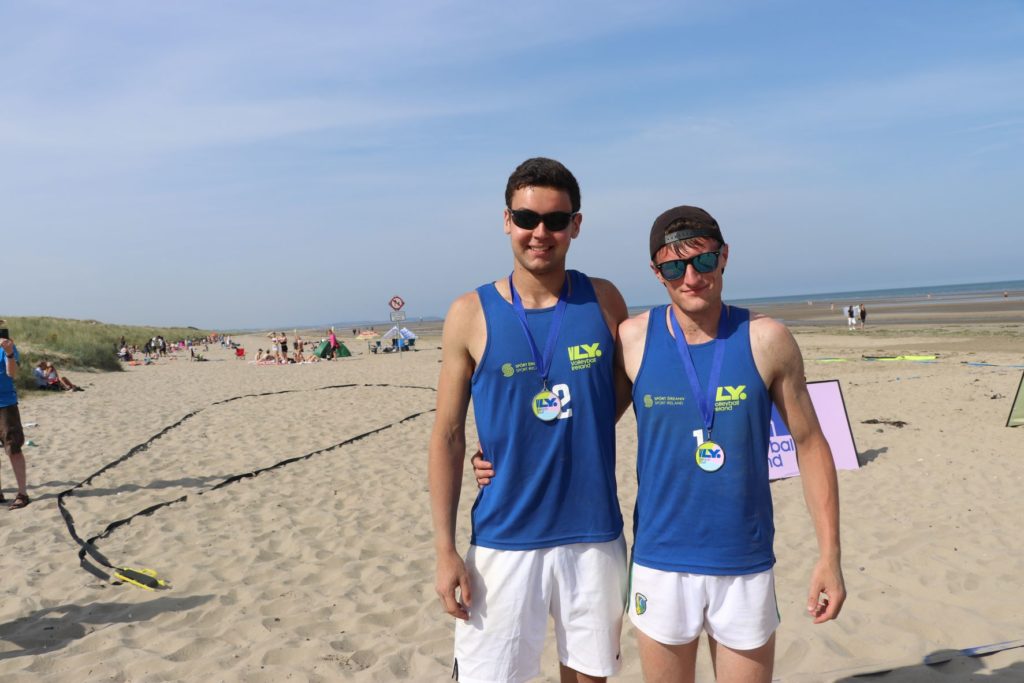 It has been one week since our young International beach players represented their country for the first time on sand. A memorable day for all players and a fantastic achievement as Ireland came away with a gold, silver and bronze. Let’s recap on how the tournament unfolded for our squads.

As the morning group games got underway both male and female Ireland teams earned some early wins to help settle the nerves. However, it was clear that strong competition from Northern Ireland meant our players would need to be at their very best to progress through the knockout stages later that day.

All the male teams progressed into the quarterfinal knockout stages and first on court for Ireland was the pairing of Leamy/Kelly. They drew a tough challenge in the NIVB number one pairing of Neill/McMurray and it wasn’t to be unfortunately after the boys had been gathering steady momentum leading into this one. Ireland number one pairing of Humphreys/Gilmartin marched their way into the semi-finals after a strong display in their quarters. There were also great wins for (3) Carey/Wyley over the NIVB number two seeds, meanwhile (2) Davoren/O’Riordain produced some fine volleyball to ensure three of the four semi-finalists were from Ireland. In semi-final one Humphreys/Gilmartin overcame their Ireland teammates of Evan/Carey to book their place in the final. Davoren/O’Riordain put up a good match against the number one Northern Ireland pairing however just came up short on the day. Our final teams were set between the top seeds from both Northern Ireland and Ireland. A game worthy of a final, there was a lot of power hitting and clever play ensuring both teams were able to pick points off each other as the sets progressed. In the end, NIVB took the 2nd set 21-18 to claim gold. Davoren/O’Riordain pipped Evan/Carey 24-22 in a thrilling finish to seal the 3rd place spot.

Over in the female category the Ireland teams were looking confident and like the boys picked up some early wins to set them on their way. With an Ireland vs Ireland playoff match scheduled pre quarterfinals, it meant we would lose one Ireland team earlier than expected. A repeat of the U20 Galway final just one week prior saw a reversal of fortune as Oliveira/Pol this time overcame Jones/O’Sullivan to progress into the quarterfinals. The NIVB teams came out strong in the knockout stages. There was a surprise defeat of Ireland number one pairing Creighton/McNichols. Tough matches and loses for McHugh/Quinn and Oliveira/Pol also meant that any chance of a medal would fall to Ireland number 2 seeds, Moloney/Connolly. Just as they had done in the quarters and against the Northern Ireland top seeds in the semis Moloney/Connolly produced a consistent game of strong serving, accurate hitting and a great teamwork attitude in the final to achieve Ireland’s first gold medal in the competition. This win also propelled the girls up the ranking to become Ireland’s junior number one pairing.

Let’s hear what some of our players had to say on the event and their own performances.

“This was my first international beach volleyball tournament. Grace and I were so excited to take part and we were absolutely thrilled to take home gold medals. I feel this is only the beginning. I am looking forward to more training and learning new skills. Our next international tournament is on 28th August, we can’t wait to play again. I am so grateful to Volleyball Ireland, all our coaches and the volleyball community for all their support and friendship”

“I was happy with the performance considering me and Cian only started working together on the beach a few weeks ago. It was a great experience and hopefully we can now build on what we have learned and progress even further!”

I really enjoyed the beach event in Bettystown. It was myself and my partner Cillian’s first competitive competition on sand. I felt we had a good level of communication between us which helped us a lot during games. We also loved the banter with our Northern Ireland counterparts who also put on a great display of skill. I loved the transition from indoor to beach volleyball, while there are different techniques for both, the speed and adrenalin pumping action remains, which is why I feel in love with the sport in the first place. I really look forward to playing high level volleyball both on and off the sand for years to come. Having played numerous sports over the years it’s volleyball that stands out for me as the sport that has it all! 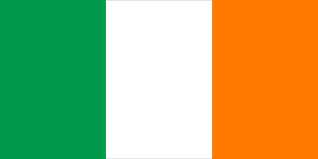