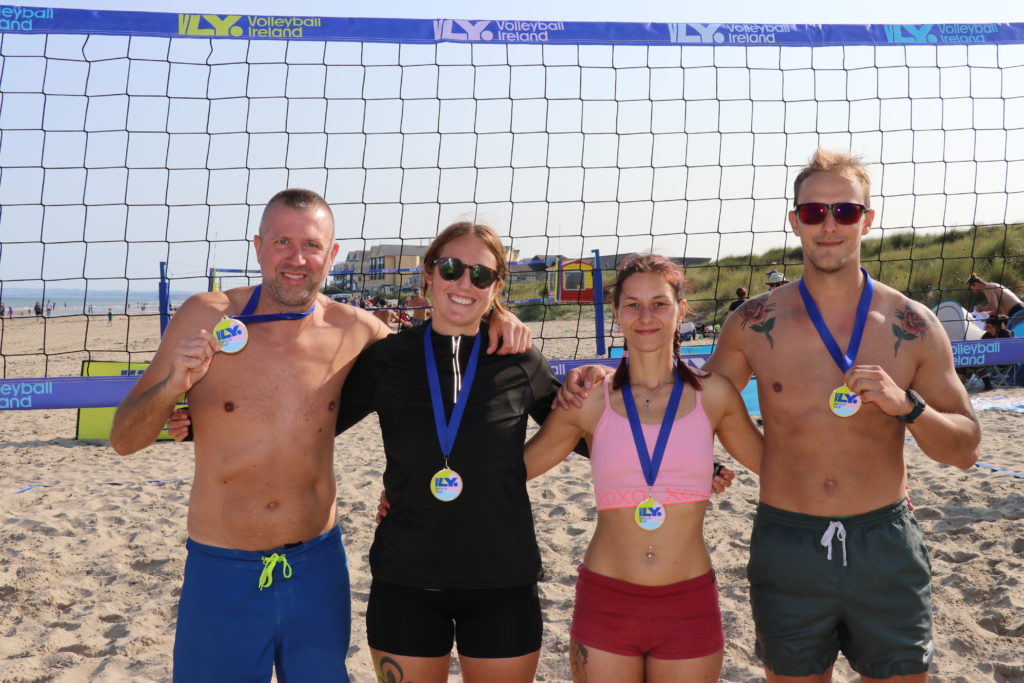 The VLY Bettystown Blast began early Saturday morning with the second 4v4 mixed competition of the summer. Ten teams with captivating titles battled it out for glory on Day 1 of the event.

Group A experienced some very tight matches throughout the pool stage early in the day.  All teams managed to grab a win meaning 3rd (Wrecking Ballz),  4th (Practice Safe Sets) and 5th place (Get Diggy With It) tied and could be spilt by only points difference.  1st and 2nd would go to The Jalapenos and Sandstorm respectively.

Over in Group B newly formed team of Notorious D.I.G found it tough going in the first few matches however got their rhythm and finished stronger just before the knockout stages. They would however ultimately fall to the junior squad players of Practice Safe Sets in their knockout game. Also, in that group Dupa Konia raced to an unbeaten 4 out of 4 games securing their slot in the semi finals later that afternoon. Coming in second with only one lose was Custra, ensuring a favourable draw in the next round for them. Balbriggan Mix managed to hold on to that 3rd spot and a chance of taking gold by registering those crucial two wins. Finally, that left The All Blacks to join Notorious D.I.G for some final seeding matches against the Group A teams.

The format of the 4v4 competition enabled the top teams of The Jalapenos and Dupa Konia to sit back and await their semi finalists. The entertainment did not disappoint as Wrecking Ballz and Custra played out an incredible 19-21, 21-18 16-14 first knockout match on the main court. In the other game Sandstorm proved too much in the end for Balbriggan Mix 21-13,21-15 and booked their place in the semi finals also.

Perhaps the additional game was just one too many for Wrecking Ballz and Sandstorm as both teams suffered straight set defeats against the table toppers. The final match was set – Dupa Konia vs The Jalapenos!

In the seeding matches it was time to say goodbye to The All Blacks (15-21, 17-21) and Notorious D.I.G (17-21, 21-23) as Get Diggy with It and Practice safe sets would compete for that higher placed finish. Another absorbing and tight three set game finally saw the more experienced Get Diggy With It prevail.

This only left our finalists, table toppers and unbeaten teams of the day so far. Once again, we were in for some incredible volleyball and entertainment. With the first two sets spilt 21-18, 18-21. It was a third set of 15-13 to Dupa Konia that sealed gold and left The Jalapenos just short on the day.

“We would like to thank Volleyball Ireland for organising such a great event on a such a lovely day ! Very well organised ! It was pleasure to participate against people from all around the world in a great atmosphere.
Congratulations to all medal winners, it was nice to win in the final against very strong opponents Rosas sisters and their boys”