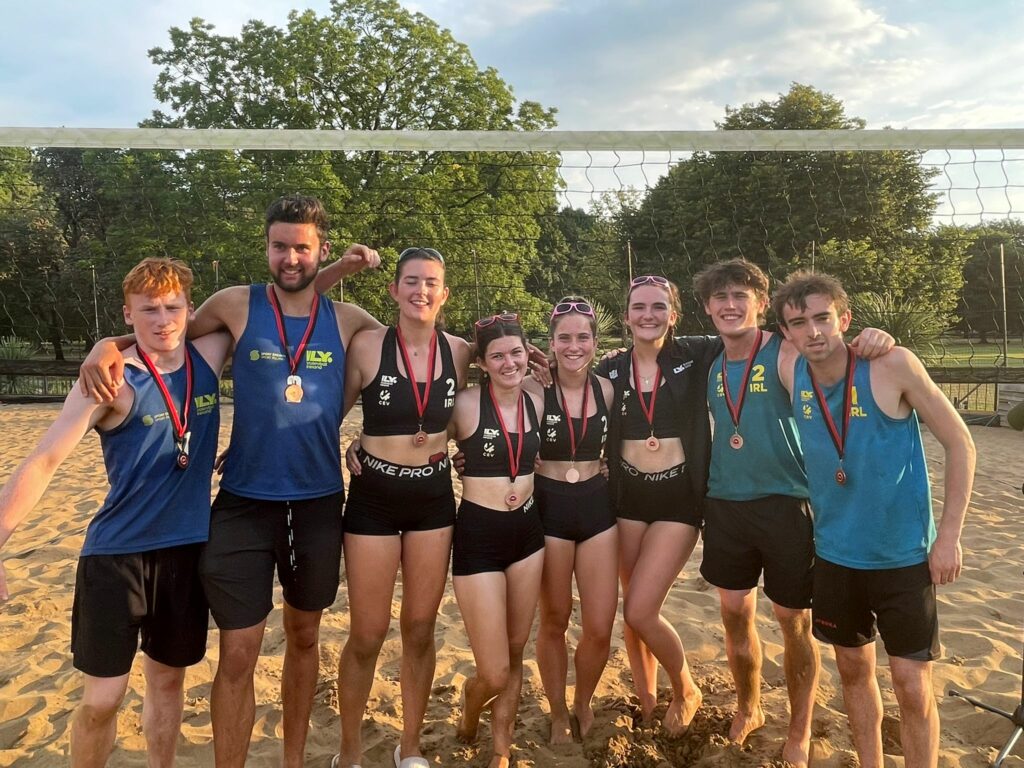 Last weekend over two gruelling days of 33 degrees heat our young future beach stars competed with the very best across the UK.  They took home bronze medals from a competition of 16 teams ensuring Irish volleyball left a lasting impact on their journey.

It was Cardiff beach volleyball courts in Victoria Park that  played host to the Junior Commonwealth Cup 2022.  We would like to acknowledge and thank Carl Hardwood and his team in hosting such a fantastic event in what can only be described as a top class venue for beach volleyball.

The Irish teams arrived late Friday afternoon and headed directly from the airport to courts. After a light training session and evening team talk they teams got to bed for what was going to be an incredibly tough weekend of play ahead both physically and mentally.

On Day 1 the Irish teams got to work unphased by the other nations they faced across the net. The teams played some brilliant and exciting volleyball which allowed them to finish the day with 14 wins from 16 matches.

Day 2 the boys had to endure one additional match to the girls. They started the day early and were able to quickly move in the quarter finals after a dominant display over Scotland II. Northern Ireland would be the competition they needed to overcome in order to book a semi final slot. Pair 1 of Davoren/Humphreys faced off against some well known NIR opponents. The teams often meet and on this occasion it was the Irish boys that came out on top in the third set (15-10) to the cheers of the relieved traveling supporters. This left Kelly/O’Riordain with the opportunity to send Ireland through and they responded in fine form, 21-15,21-10.

The girls unfortunately lost their first match of the tournament to a very strong SW England team as they got their final day underway. After such a dominant first day and double elimination format in play it meant the girls had another opportunity to progress. They would however have to overcome a strong Welsh team. Pair 2 Creighton / McNichols continued to dispatch their opponents in straight sets meaning if Connolly/Moloney could find the win the girls were through. After a first set win the pair looked to be heading towards a third set as the scoreboard highlighted 14-20. The Irish dug deep and spurred on by some incredible traveling support they took the set and the match 22-20.

Onto the semis! Both teams faced off against the only unbeaten sides in the tournament so far. The Irish girls put in an unbelievable performance but came up just short in both matches against the eventual tournament winners All England (Pair 1 20-22, 18-21,) ( Pair 2 17-21, 21-23)

The boys also came agonisingly close as Kelly/O’Riordain took the first set but were unable to hold the SW England lads. Davoren/Humphreys produced a proud display but were finely undone against Tildesly/Morgan. Two names we are sure to hear off again on the beach circuit.

Not to be deterred the Irish teams picked themselves up and finished their tournaments in style. The boys took bronze through a straight sets win over Wales The girls ensured the tournament finished in an exciting manner as they won through a third set  victory over SE England 16-14!

Volleyball Ireland would like to express our gratitude to Denise Austin for facilitating such a wonderful event. The development, friendships and experience our teams have gained is unmeasurable. Thank you Denise!

Last, but not least. We would like to show our appreciation for Julio Rico. Julio travelled with the team to gain some valuable experience as he works his way up our beach referee pathway towards international status.

“Our Juniors showed tremendous mental and physical toughness in some very difficult playing conditions. All their hard hard this summer prepared them for their toughest competition yet, and they’ve proven themselves against some of the best teams in the UK. With the respect they’ve earned this is sure to open up many more doors to further competitions, and we will continue to build off this success”

“Its full credit to the boys. They have travelled the country to attend trainings and tournaments rain or shine. As a result they have risen above all expectations to win a bronze medal in very difficult conditions. The joy I felt when the final whistle was blown and to see the massive smiles on their faces. It was a beautiful moment, something I will remember throughout my career.”