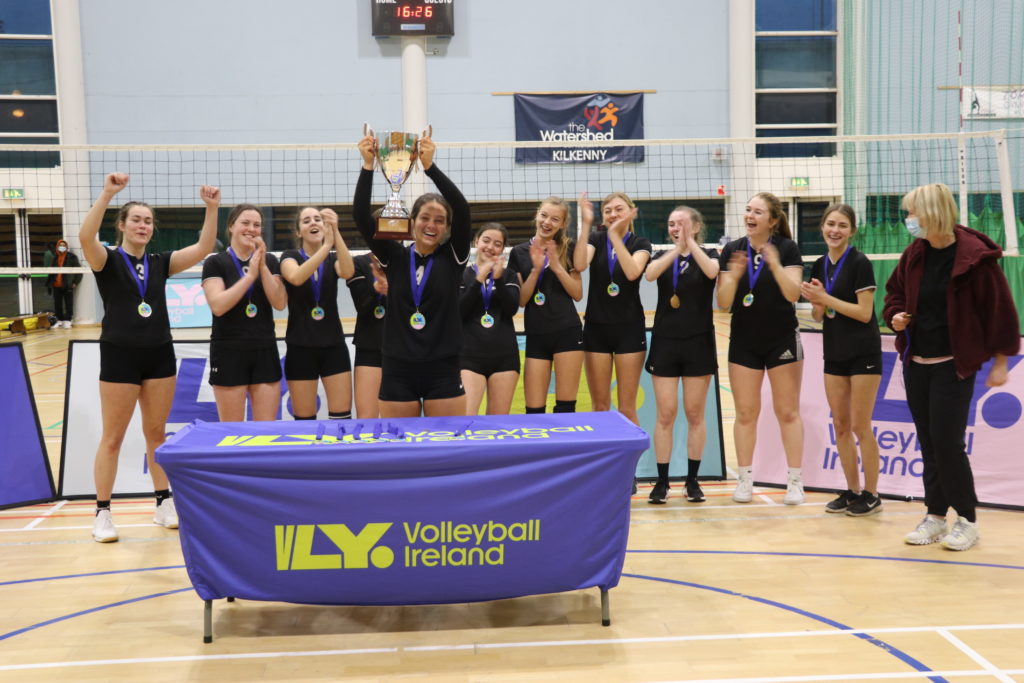 St Leo’s College, Carlow emerged victors yesterday after a day of thrilling volleyball in the Senior B Girls National Final.

Our largest school final this academic year so far meant early starts for teams across the country. All hoping to descend on the excellent Watershed Sports Complex and leave as newly crowned champions.

A round robin of 3 pools and 3 courts running continually meant lots of volleyball on display. To watch back matches check out our YouTube channel

The group of death on court 1 consisting of  new comers Nord Anglia, Sutton Park, St Leo’s and Ardscoil Mhuire fought relentlessly to capture that top spot and a sweeter draw for the knockouts. Deciding set scores of 30-28, 25-23, 25-21, 26-24 and 25-23 would clearly highlight there would be no easy games today for any school. It was St Leo’s that pipped the others and set down the early marker for all schools.

Over in Pool B we had the traditional volleyball schools of Pres. Kilkenny, St Brigid’s Pres and Rockford Manor all competing fiercely but with only one able to take 1st place in the group it was home town school of Pres Kilkenny that overcame Rockford 25-21 to get them a bye straight into the quarter finals.

Our final Pool C was primarily a Connacht playoff with Dublin school and previous u16 C champions Grange CC joining them to make the 4th team. Two Roscommon Schools in Ros CC and Convent of Mercy would know each other well and it was Ros CC that enjoyed a win over their neighbour in the early stages. The 4th team and well known volleyballers St Brigid’s College, Loughrea topped the group with straight wins however didn’t have it as easy as they hoped with Grange CC pushing them all the way before losing 25-21 to seal a 2nd place.

As the knockouts and afternoon session rolled on we began to lose some very strong schools in extremely tight matches.

Our semi finalists of St Leo’s College continued to produce fine 3 touch volleyball to eliminate Rockford Manor in their 2nd semi final lose this week. A credit to the Dublin school and how competitive they have become in multiple divisions. Over on Semi final 2, Pres.  Kilkenny faced off against St Brigid’s College in a cracking semi final full of strong serving and  good team work from both teams involved. It was the Galway school however that would take the  win and make their first Senior B final appearance since 2009.

Friends and opposing coaches Mary Barrett and Vivienne O’Neill would know each other’s style very well and it made for a cagey first opening set. Both teams holding back a little as they picked score by score from each other. As the match went on St Leo’s and in particular MVP Paula Beltran took control to send their school to their first Senior B trophy. Not before an incredible push in the final set by the Loughrea school to make Leo’s work hard for their win all the way. (25-13, 25-23)

for the Senior B photo gallery check out our website