Portlaoise Do The Double! 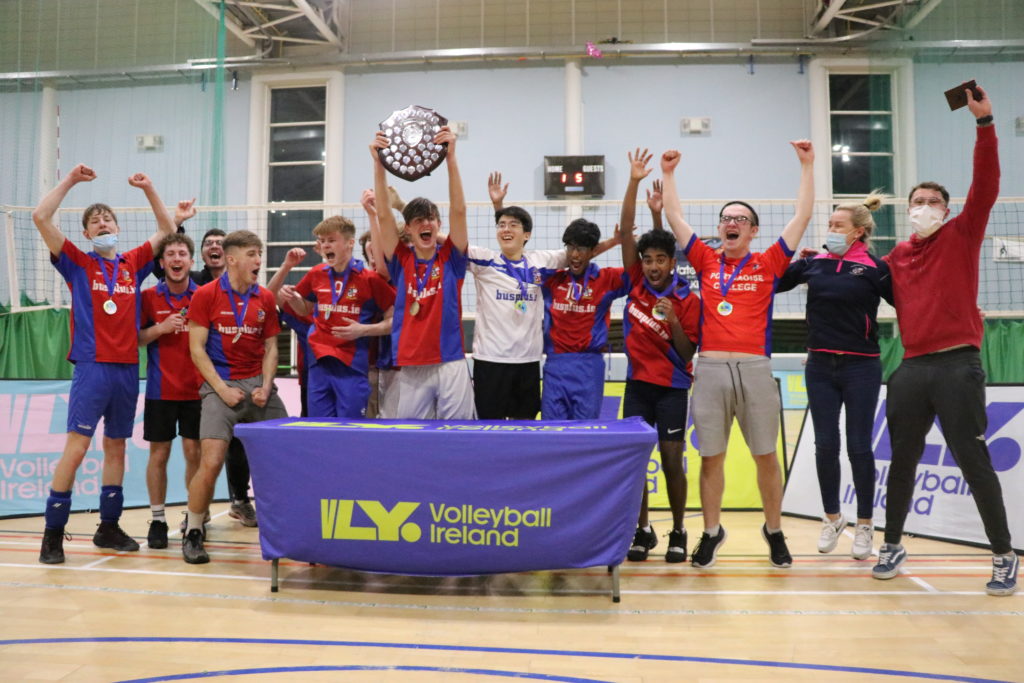 What a week for the midlands school as their boys raced to a Senior B National title, matching their girls achievement just 2 days earlier.

Our final event for seniors had VLY back in Kilkenny to witness the Senior B Boys go head to head. Our 12 finalists had an incredible 6 new schools in attendance.

In Pool A, St Brigid’s College B team were up against Patrician Pres, Celbridge CS and Coláiste Pobail Setanta. (CPS) No big surprises early on as St Brigid’s powered to the top of group but new schools CPS and Celbridge both found their way into some nice flowing volleyball as the group stages closed. In Pool B, three new schools joined Portlaoise College, Charleville CBS, Nord Anglia IS and Hansfield ETSS all registered hard fought wins in their inaugural tournament.
The final group pooled Mountrath CS alongside Coachford College, Roscommon CC and Mungret CC. The new schools made up 75% of this pool and therefore an unpredictable group place finish.
Joining St Brigid’s as table toppers were Portlaoise and Mountrath.
In the playoffs we had a fantastic 6 new schools all competing at the same time across all courts. Unfortunately this meant we would lose some early. Leaving before the quarters was heavily supported Coachford going down 25-21 to CPS. Nord Anglia also lost by the same margin to the ever improving Celbridge. Finally Roscommon CC bowed out after some strong serving from Charleville.
As the table toppers returned to play we witnessed an unbelievable comeback from Charleville to knockout strong contenders Brigid’s 25-23. Portlaoise continued to impress and moved nicely into the semis at the expense of CPS, while Celbridge put on a shock performance also to send Mountrath home early. Our semis were set and two veteran schools against two newcomers: Portlaoise VS Celbridge, Patrician Pres. Vs Charleville.
Unfortunately, it was perhaps experience that won out as both the Laois and Tipperary schools advanced.
Our final school match of 2021 had arrived. A very tight first set came to a head as the Fethard school scrambled back from 23-17 to clinch the first set 25-23. Portlaoise then tied it up with a convincing 25-17 win making sure our boys final event went to the wire. Both teams worked hard for their teammates leading to one of the closest finishes in years. Taking home the title however with some strong hitting from MVP Aiden Grace was Portlaoise College!