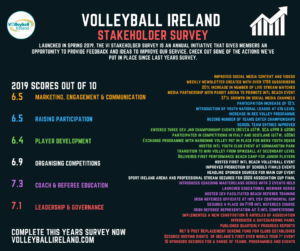 ​Volleyball Ireland has published in first quarterly report of 2020, with a significant increase in registered junior players compared to the same period of last year.

227 under 18s have active player licenses compared with the end of March 2019, which is mainly due to the fantastic development work carried out in clubs across the country. The newly formed youth national leagues at u18 and u16 level for girls, is driving participation.

Commenting on the data, General Manager Gary Stewart said, “The Q1 participation report shows that the investment in proper youth competitions is paying off. Not only that, there is clearly an improvement in the standard of youth players coming through which means that the average age of players in the adult national league competition is coming down. There are lots of elements contribute to this including quality school programmes, proactive clubs, a progressive youth national team programme and decent coach education courses and workshops.”

A chunk of the youth participation is related to a new Beginner Club Tour that the VI Development team had planned for March in Limerick, which had almost 50 u13s registered. The week after the first National level boys competition set of Loughrea also had to be postponed due to the Covid19 outbreak.

With this in mind Volleyball Ireland are hosting a webinar on youth section development next Thursday at 8pm. (See http://www.volleyballireland.com/webinar-series.html#/)

It will be interesting to see what impact the Covid19 situation will have on the figures this time next year, Gary added, “For obvious reasons we haven’t opened the beach registration yet which is skewing figures slightly. Also it’s worth noting that the number of licensed referees has reduced, so this is an area we need to address quickly and team working with the Education & Training Commission are planning some new initiatives ahead of the new season.”

Away from the court, the marketing and promotion of Volleyball is improving with a 37% increase in digital followers, mainly driven through more creative content and an increase in the streaming of various events.