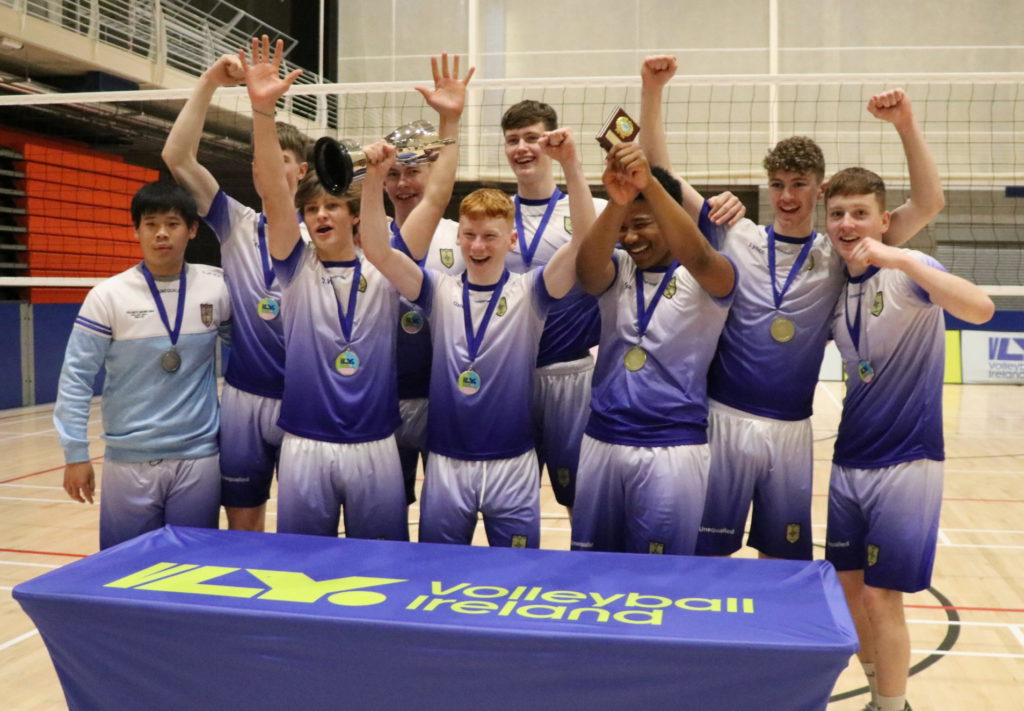 St Brigid’s College add their name to the Senior Boys A trophy once móre after a marathon of volleyball in the UL sports Arena, Limerick.

The top 8 teams in the country got together to battle it out and what a battle it was.

Old rivals Drumshanbo and St Brigids opened up proceedings with the Galway school sending out a clear message early on via a 25-9 win. Also joining them in Pool A was new school Coláiste Na Hlnse and Sutton Park. Sutton Park put on some good early displays of volleyball demonstrating why they are now an A graded school. They picked up a 3rd place finish just ahead of Colaiste na Hlnse in the group.

The 2nd pool contained Elphin CC, St Raphaels, Dungarvan College, and Colaiste An Eachréidh. All schools that most wouldn’t be surprised to see taking home the title at the end of the day.

With 3 wins from 3 Elphin CC showed why they were u16 runners up last time out. All other teams could only be separated by points difference but with all teams qualifying to the quarters, Raphaels,  An Eachréidh and Dungarvan would finally place in that order.

As we moved onto the knockout stages Dungarvan gave Brigids a fright as they moved to a 19-14 lead but just couldn’t get over the line. Elphin continued to be strong eliminating the Atthenry school 25-21. Joining the two in form teams would be Drumshanbo and Sutton Park as they overcame Raphaels and Na Hlnse in their matches.

Neighbours Elphin and Drumshanbo competed in semi final 1 with the Roscommon school getting the better of their opponents this time round. Semi final 2 was a much closer affair as Dublin school Sutton pushed St Brigid’s all the way but just lost out 25-23, 25-21.

We had our 2021 finalists! Elphin vs St Brigid’s. It was Elphin that came out determined to take home winners medals and took the first set through some great hitting and cover from both Conor Burke and Declan Main. Brigid’s however stealing the 2nd with some powerful hitting themselves down the wing from Irish international Ciagan Davoren. The 3rd and final set was a cagey one with both teams desperate to win after such a long day of volleyball. In the end it was the Galway school once again that found something extra to claim bragging rights as the top boys school in the country.